Fiction by Brenna: The Bone Tender 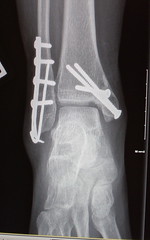 When Brandon Rowe was eight years old, he hit a squirrel with a rock and broke its back. I know because I was standing on the other side of the fence, watching.

After he went inside, I climbed into his backyard and crouched over the squirrel. I petted it. Its fur was soft and felt like the collar on my mom's winter coat.

When I carried it home wrapped in my shirt, my mom told me not to touch it, it was dirty and I'd get a bad disease. My sister Rosie, who was in eighth grade, helped me make a bed for it with a shoebox and some rags. When I picked the squirrel up to set it in the box, it looked at me with one shoe-black eye and made a noise like a rusty can opener, but it didn't move. Rosie showed me how to give it water from a plastic dropper. Then she took me in the bathroom and made me wash my hands.

She said, “It might die tonight, okay? If that happens, don't be scared. Just come get me.”

I was scared, though. The squirrel was little and soft. The room smelled like Dial soap, and I tried not to cry.

“Oh, Noah, don't be sad. Things die from shock sometimes, is all.”

I spent all night lying on my floor next to the box and watching the squirrel breathe, putting my hands on its back, feeling the places where the bones didn't line up. The squirrel twitched and shook. Then it stayed still.

I was seven. What did I know? In the morning, the squirrel was still breathing, and when it climbed out of the box and whisked in circles around my room, I was the only one who wasn't surprised.

*****
When Brandon was twelve, he broke my best friend Milo's pinky finger. We were down at the community pool and Brandon pushed Milo off the diving board and jumped in after him, even though Milo was still splashing around like a drowning cat and couldn't get out of the way.

Brandon crashed down on top of him, and when Milo struggled back up to the surface, the look on his face was all shock and white-lipped pain.

After Milo paddled awkwardly over to the side, we sat on the edge of pool and I studied the damage while Brandon stood over us, calling us a couple of whiny little gaywads for holding hands. I looked for guilt or pity in his face but didn't see it. His grin was so wide it made me feel uneasy, and like the world was a pretty out-of-control place. Milo's hand was swelled-up, already turning purple.

“Hold still,” I said, and Milo nodded and squeezed his eyes shut.

“What are you going to do?” he whispered. His face was so pale he looked gray.

The hardest part was setting the broken ends back together. Milo kept his eyes closed, swaying a little on the edge of the pool. I held his hand between both of mine and waited for the rush of electricity that would mean it was working.

“What a couple of queermos,” said Brandon, and I tried to tell myself it was because he was secretly sorry, but I didn't believe it.

*****
When Brandon was fifteen, we had PE together. The class was supposed to be for freshmen, but he'd skipped so many times the year before that he had to take it over.

On the second day, he hit Melody Solomon in the face with the volleyball. He did act sorry that time, but only because she looked like a cheerleader. He wouldn't have cared if the same thing had happened to one of the fat girls, but Melody had shiny hair, nice legs, and a very good tan.

When he tried to say he was sorry, she twisted away from him, cupping her hands over her face.

“Here, let me see,” I said, reaching for her shoulder. She jumped like I'd startled her, but didn't recoil the way she had with Brandon.

When she took her hands away from her face, blood was running down over her bottom lip and dripping off her chin.

She didn't look at all sure about that, but she nodded.

I ran my fingers along the bridge of her nose, feeling for the break. It was high up and to one side. When I pressed the cartilage back into place and held it there, Melody winced and tears leaked out of her eyes. She was watching me with this numb, pleading look that reminded me of the squirrel and how it stared at me defenselessly, like it didn't have a choice. Her eyes were gray, with pale starbursts around the pupils, like tiny metallic suns.

Behind me, Brandon made a thick, disgusted noise. “Oh, gross—don't let Noah touch you or you'll get his nasty-ass stink all over you!”

And Melody flinched and pulled away. Her expression was frightened, almost lost, and I could still feel tingling sensation the in my fingertips.

Brandon laughed and pushed me hard between the shoulder blades. “You don't know where he's been, Mel. I've seen him out on Garner Street, playing with the roadkill.”

And it was one afternoon, hot and dismal, and one panicked shuddering dog, but it didn't matter. For the rest of the year, everyone called me skunk-boy. Melody's nose healed straight and perfect, but she never looked me in the face again.

*****
When Brandon was seventeen, he shattered his right ankle in a car accident. He also broke his collarbone and fractured his left femur. It happened the week before soccer started and the accident was pretty much the end of his season—maybe the end of all his seasons.

He missed a lot of school and being the good neighbor she is, my mom volunteered me to get his homework assignments and bring them over to his house.

I hadn't been in his house since I was a little kid, and the few memories I had of the Rowe place weren't good memories. When I came into the living room, Brandon was sitting in his rented wheelchair in front of the TV, watching like he wasn't really seeing it.

I dropped the stack of make-up work on the coffee table and he didn't look up. I was used to him vicious and laughing, but now he just looked resigned. He looked like he hadn't been sleeping.

“The project for history is a research paper. Give me your list of books by Thursday and I'll get them from the library.”

When he still didn't say anything, I turned and started for the door.

“Are you going to do your crazy-voodoo laying-on of hands thing?” Brandon's voice was low and flat and when I turned around again, he was still looking at the TV. “I mean, isn't that what you do?”

I didn't answer. There were plenty of things I should have said—excuse me? or I don't know what you're talking about—but the truth was, I kind of wanted to.

His injuries were bad, worse than anything I'd ever seen—worse than dying squirrels or skinny, shivering best friends or beautiful girls in PE. I was half-crazy to see what would happen if I tried my touch on a really bad break, one that might never heal right, even with pins and screws.

Brandon sat in his chair, looking up at me, and my hands felt hot. My skin was singing with adrenaline, a wild electricity that couldn't wait to jolt out of my fingers and into bone. I knew, without a doubt, that I could do it—knew with ninety-nine percent certainty. Except.

Except, I didn't feel pity when I looked at him. Except, I'd spent more than half my life mending bones and now, in the tips of my fingers, something didn't feel right. My hands were hot.

Brandon watched me without saying anything, and then his face changed. His stare turned hopeless and painful, like he knew there was cruelty sparking off my fingertips, burning in my blood. He could see it on me, before I was even sure that it was there.

“Jesus, Noah,” he whispered, and his voice sounded tired and almost frightened.