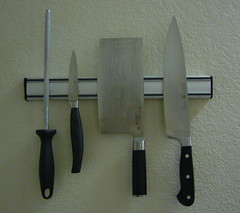 The house seems wrong as soon I step into the front hall. I take off my boots and hang up my coat, smelling rain. And that's fine, because it's raining. Except, the furnace is on and the warm, dusty smell should cancel out everything else, and I closed the window before I left. I know this. I know I closed it. The breeze blowing down the hall from the kitchen is cold and brackish, straight off the river.

In the kitchen, the window above the sink is flung wide, screen in tatters, rain trickling down the wall and pooling on the counter. With electric clarity, my gaze leaps to the magnetic utensil strip on the wall. The nine-inch chef's knife is missing and suddenly my heart is going a million beats a minute.

“Turn around,” says a voice behind me. The tone is low, predatory, and makes panic race down the back of my neck.

When I turn, a guy in a damp canvas coat is standing in the doorway.

He's my age, maybe a little younger. Tall, but with stooped shoulders. His hair is shaggy, wet from the rain. The missing knife is in his hand. The way he holds it is casual, easy. There's nothing skittish about him, and that's what makes my heart lurch in my chest—the easy way he holds a knife. I look at him and don't say anything.

When he smiles, it's almost sweet. “Don't you want to know who I am and what I'm doing here?”

I shake my head, willing myself to look composed, but for a second, my mouth won't shut.

“My boyfriend will be home any minute.”

“No he won't.” And this time when he smiles, it's hard and chilly and gets nowhere near his eyes. “His car's been gone for two weeks. I don't think he's coming back.”

“He was on—on a business trip, but he's home now, he'll be coming home tonight, any second. If he finds you here . . .” But the threat trails off, empty in the bright glow of the kitchen.

He just nods, giving me a hard, scornful look. “Right. Where's all his stuff then?”

And I'm steamrolled by the knowledge that this is no accident, that he's been watching me. That Dalton has been a done deal for quite a while and this guy knows it. His gaze is flat, without texture or depth, and I already know that something's wrong inside him—a flipped switch that makes him walk into a girl's kitchen and take a knife off her wall.

He moves closer, unhurried, staring into my face and I know for sure that he's the textbook definition of dangerous. Not troubled or misguided. He is a stone-cold psychopath.

“I want to know what it's like,” he says, easing his thumb over the blade, testing it. “To kill someone.”

“They'll catch you,” I say, backing away from him. Two shuffling steps before the countertop presses into my spine and I go rigid and still. “Don't you care about being caught?”

For a second, he doesn't seem to hear. Then he grins, shaking his head. “How will they catch me? It's a break-in, a burglary gone wrong. Happens all the time. Everyone will be so sad for you.” He smiles like the idea pleases him.

“But there are so many things that could give you away. What about DNA? It's almost impossible to kill someone at close proximity without leaving something behind. What if I scratch you? What if you leave a fingerprint somewhere, or clothing fibers under my nails? And you need a plan to dispose of the body. Unless you want to go down for first degree, you can't stab me in my own home and then just leave me here—too much evidence. Do you have a car?”

He throws his head back, incredulous, still smiling. “And you're telling me all this . . . why?”

“Because—” and my voice sounds shrill and much too loud. I take a deep breath, smile like I'm selling real estate or dishwashers and start over. “Well, because you're doing this all wrong. If you really want to kill someone, it has to look so much like an accident that no one will even investigate.”

For the first time, his smile wavers. His jaw is tight with something like rage. “And how do you know so much?” In his hand, the blade looks very sharp, reflecting the glare from the overhead light. His expression is watchful, and I'm certain that he's imaging my blood.

I take a deep, shuddering breath and blurt out, “When I was twelve years old, I drowned my sister.”

For a second, he doesn't respond. Then he moves closer, looking almost troubled. “Why?”

The story rushes together in my head and I claw through the pieces, trying out answers and discarding them: because I was jealous of her beauty and her popularity, jealous of our parents' affection for her, angry because she broke a toy that mattered to me or always teased me or never loved me?

“Because I wanted to know what it was like,” I whisper, trying to look how he might think a child-murderer should look. Honest, but unrepentant. “Because I'm like you.”

He covers the space between us in two steps and suddenly I'm frozen, balanced on the point of my most expensive kitchen knife, chin up, head tipped back at an awkward angle. “Are you lying to me?” he snarls.

The steel is cold against my throat. I shiver and breathe out, but never look away from his face. “No,” I say softly. “No, I wouldn't lie to you.”

“Good. Because if you're lying, I will gut here and now.”

“Look—I'm just trying to help you. If you want to kill someone, you should do it where no one will find the body. Or where people die anyway. Where it will look like a freak accident or a crime of necessity. I can help you,” I whisper, biting down on every word, horribly aware of how my pulse beats in my throat, thrumming against the knifepoint. “We could find someone really good—disposable, a lowlife who deserves it. Some people just aren't meant to live. I can show you how to get away with it.”

“Right.” He sounds disgusted. “Why would you do that? Why would you help me?” His face is close to mine, cheeks red, teeth bared, but anger is better than flat, affectless nothing. Flat means no remorse, no reasoning. It means one centimeter away from being stabbed to death in my kitchen.

“Please, I told you about my sister. I told you a secret!” I gasp it, almost wail it, trying to sell the promise of camaraderie—that it will be me and him, two sick customers, partners in homicide. The promise that I am not lying.

He nods, stepping back, looking dazed, and lets the knife drop from my throat. I go limp inside but don't sigh aloud.

“And if I walk out of here,” he says, sounding almost sad, “what'll stop you from calling the police?”

“You know about me. I could never turn you in—you'd tell them what I did!”

He sets the knife on the counter, looking lost and pitiful, like maybe all he's ever wanted is for someone to know about him.

“We should make a plan,” I say, giving him a quick, sideways look. Almost flirtatious? “Meet downtown somewhere, do some recon. If we dress right, we can pass for vagrants or bar-flies. No one will remember seeing us. We need someplace with loiterers and lots of foot traffic—maybe the bus station? In two hours? Let's meet behind the bus station.”

My voice sounds wrong, a little forced, but his eyes are hopeful and he wants so badly to believe me.

“You better not stand me up,” he says, shaking a finger at me. “I know where you live.” But he says it with a smile. On someone less homicidal, it would sound almost like he was making a joke.

I let him out through the back door and watch him go, waving from the porch steps.

After he's over the fence and out of sight, I go down into the basement and stand at the workbench, sorting through my supplies. It's nice, living alone. I can leave things lying out now. Taser-plus-piano-wire is very efficient, but I like cyanide for strangers.

The story of my sister was a risky move, hard to sound convincing. The memory is clear, but featureless, gone over so many times I've worn the details off. I don't even remember what it felt like.

I didn't want to do this so soon after Dalton, but the neighborhood seems content to take that for the heartrending tragedy it was—her longtime boyfriend, poor girl—and I don't see any other way. Some people just aren't meant to live.