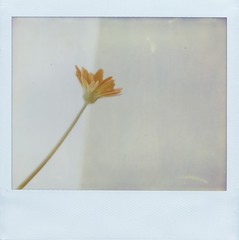 It takes forever for the house next door to sell. Poor For Sale Sign, rickety and crooked, like it's been leaning there all summer, all year, all my life.

The real estate agent blames the lack of interest—no, the entire state of the housing market—on our yard. She leaves a note taped to our front door, saying that no decent family would move in next to a disaster like ours, that the lawn is an eyesore. And it kind of is. I want to tell my dad to get off his ass, crawl out of the bottle and pull-start that mower, but at the same time, I don't want to tell him anything. It's easier, just walking past the mess like it doesn't even exist.

And the house does sell, despite the condition of our yard. I lie out in the weedy grass and watch the people come and go, first the movers and then the family. Their son looks my age, maybe a year or two older. He's tall and dark-haired, with great shoulders and long, graceful hands. He's always texting—never even looks up or turns around, but I don't need to know the color of his eyes to tell that he's delicious. I watch from over the fence, hopeful and terrified that at any moment, he'll turn and see me there.

The girl is less oblivious. On the second day, she comes wandering over with bare feet and a beat-to-hell polaroid camera.

She's younger, eleven or twelve, with a round, pale face and bangs cut short and straight across. Her hair is black and makes her look like a gothic babydoll. She's holding a handful of fresh photos and staring at me like I'm some kind of extraterrestrial. Her eyes are ice-blue with freakishly long lashes.

I flick a hand at her and smile. She's way too young to actually hang out with, but maybe she'll invite me over anyway.

“What's you name?” I ask brightly, but I already know. Behind her, the guy—obviously her brother—is sitting on the steps, gazing intently at his phone. There's a box next to him, with photo albums and notebooks and a well-loved plush unicorn sticking out of the top. The name Abby is scrawled down the side in marker.

At first, she won't answer or look at me, so I just keep talking, yammering about whatever, glancing past her every now and then to see if her brother is watching.

Finally, she takes a step closer. “How long have you lived here,” she asks in a tiny voice.

She tips her face to the sky. “What's it like? Is there anything to do?”

“Well, what kinds of things do you want to do?”

“I like to take pictures,” she says, offering the handful of photos, fanning them out like playing cards. The paper is slick and glossy. The pictures are of the house and the yard, her brother standing by their one skinny tree, a burly pair of movers wrestling a red couch up the front steps in a long awkward diagonal.

“They're nice,” I say. And they are. Surprisingly nice. The one of her brother makes me feel weirdly sad, like seeing a helium balloon tied to a railing somewhere, and knowing that no one's coming back for it.

Abby smiles and looks away. “I have more. I keep them in an album.”

“Will you take my picture?” I pose for her, leaning on the fence, propping my chin on one hand.

She regards me doubtfully, then raises the camera anyway. When she presses the button, there's a click and a flash and the camera spits out a pale square of paper. Abby catches it and stands, head bent, watching it develop. Her expression is so blank that it could mean a million things.

“No,” she says, holding it against her chest.

“O-kay, never mind then. So, does your brother have a girlfriend?”

“Yes. But she doesn't live here. She goes to his old school.”

A tiny flare of hope—I mean, distance is a killer, and how long can you really stay together when texting is the primary basis for a relationship? If I can just get him to see that I exist, maybe I can cure him of the girlfriend. “Is he always on his phone like that?”

Abby shrugs and shakes her head. “He's been really into it lately. He didn't want to move.”

“Yeah, that sucks. Maybe I should go over and introduce myself. You know, show him around.”

Abby follows my gaze, waving the polaroid in one soft, little-girl hand, careful to keep it turned away from me. “Do you ever feel . . . forgotten?” she says, and her voice cracks on the last word. Behind her, her brother is still staring into the vortex of his phone, ignoring the way she slouches by the fence.

The summer has been the longest, slowest, stupidest of my life. My dad sits in his study or in front of the TV, and talking about feeling forgotten just makes you feel more forgotten, so I smile like nothing is wrong. “Look, I'm sure he'll get over it. Maybe I could come over and see your album sometime.”

“No,” she says, the word coming out much too loud. Then she takes a deep breath and shakes her head. “I mean, I don't think it would be a good idea.”

“So, are you going to show your brother my picture?”

She gives me a sideways look and shakes her head again.

“Only if you really want to.” Her expression is so empty it's unreadable.

She holds out the picture, offering it to me over the fence. I don't take it from her, just look. The paper, shiny and old-fashioned, familiar band of white along the bottom. In the foreground, the pickets of the fence are jagged like teeth. Behind it, empty sky.

Where there should be a girl with long brown hair and freckles, there's nothing.

I just shrug, smile weakly. I mean, what can you say?

“How did you die?” Her voice is thin and shaking.

And I want to tell her that I don't know. I don't have even the faintest idea. But I do. Sometimes, you make yourself forget the things that make you stop breathing. You remember them and you still forget anyway. I was riding my bike to the lake, out along the county road, and then it was over. Just like that.

Abby backs away, clutching the photo. “Did you not know?”

She watches me with brimming eyes. “You're not going to haunt me, are you?”

“What do you want, then?” she says, looking miserable.

The question is so honest it's painful. I want to eat Sour Patch Kids and kiss boys and walk down to the Dairy Queen with my friends—all those friends I used to have. I want to spend my days with someone else, do what they do and not be shut up in my house all the time, alone with no one but my father.

She looks so lonely standing there. So lost, and I want to hug her but the fence is in the way and what if my hands go right through?

“Can I take your picture?” I ask, because it seems to be a language she understands.

When she passes me the camera, it feels angular and solid, like I am really holding it. Sometimes I remember the world so clearly it almost seems real, and even though I can't shake the knowledge that I'm not there, I push the button, take the picture anyway.

The camera whirs and grinds, spitting out the square of paper and we stand with our heads together, with the fence between us, waiting for the image to show up.

Shapes appear, ghostly at first, then showing up clearer and clearer. Her lawn, weed-free and carefully mowed, racing to the edges of the photo like a tiny green sea. There in the background, her brother is texting, sitting on the steps beside the abandoned box. The Abby box, overflowing with notebooks, stuffed animals, photo albums and an old polaroid camera, and this whole time, they have not brought in one stick of furniture that looks like it belongs to a twelve-year-old girl.

The photo is crisp, everything bright and in focus. There is no black-haired gothic babydoll—no Abby, besides what's in the box—and I knew that too. I knew it since she crossed the lawn to talk to me. Knew it even when I wanted, wanted, wanted to know something else.

“I'm sorry,” I say, because the look on her face is like looking at myself.