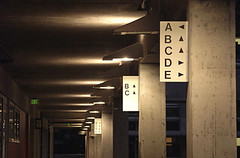 It's two-thirty on a Sunday afternoon. I'm leaned way back in my chair, pulling my gum out of my mouth in a long ribbon and popping it back in. My supervisor would throw a fit, but no one's around, so it doesn't matter. I have afternoons because I hate getting up before eleven. I have Sundays, because no one has a pressing need for information on Sundays and I'm close to antisocial.

When the guy cuts through the lobby and stops at the map kiosk, I watch him for awhile. When he glances over his shoulder, the look he gives me is casual, not overly curious. No love for a girl as skinny and flat-chested as a boy.

After a minute though, he comes up to the desk. “Hey, is Macy around?”

Macy. The pretty one. Too blond to function. She wears bright rayon shirts and can never stop touching her bottom lip. I hate how she's always getting her lipgloss everywhere.

But fiddling with your mouth is a kind of mating ritual, and guys like him like that kind of thing. I stop torturing my gum. His hair is shaggy, falling artfully over one eye. His smile is the kind that melts glaciers off of bigger glaciers.

“Macy's only here on Thursdays,” I tell him.

When he leans his elbows on the information desk, the formica surface seems to shrink between us. I'm completely unimpressed by his orthodontically perfect teeth, but god help me, I want to kiss him anyway.

He smiles like the Texas sun. “I'll come back on Thursday, then.”

But he doesn't wait that long.

*****
On Monday, he comes over to me, carrying a black canvas book-bag and a little paper map.

“Can you help me?” he says, planting his elbows on the desk and spreading the map between us.

“That depends,” I say with a tiny, bashful smile. “Are you in the market for information?” and then berate myself when it comes out stupider than it sounded in my head.

He just hunches closer and smiles back. “Man, you're way friendlier than that girl yesterday. What was up with her?”

I roll my eyes and hope it seems natural. “You mean Kelsey? Don't take it personally. She's not really a people person. What can I help you with?”

We lean over his paper map, considering the corridors and classrooms. He smells like running water and forgetting. He smells like a birthday party where you get just the right present.

“You want C-wing hall,” I tell him, drawing out the path with my finger. “When you get to this corridor that runs past the gym, take your second left.”

“Hey,” he says, sounding so offhand that it makes me feel fat and close to invisible. “Thanks. What's your name again?”

“Lesley,” I say, and don't point out that there is no again, that he never knew it in the first place.

*****
On Tuesday, he shows up just after the late bell, looking wide-eyed and harassed. He starts down the C-wing hall, then doubles back. “Hey, can you tell me how to get to the science block? I thought I knew, but now everything seems turned around.”

I close my book, using my finger to mark my place, and take a minute to admire the way he looks so crushable and cool, even with his hair standing up a little, like he can't stop raking his hands through it. “Yeah, it's easy. Just cut through the commons, and then take a right down D-wing hall. It'll be just past the library.”

“Are you sure? I swear the girl yesterday said to head towards the gym.”

“That was yesterday,” I tell him, wishing for Macy's easy smile. For her blond curls and her flirtatious way of tilting her chin or messing with her pen. “You need to turn right at D-wing.”

“Wow.” He shakes his head, grinning sideways at me. “And that other girl, Macy, told me something completely different. Looks like I'm going to have to give her a talking to when I see her. Maybe sit her down for coffee and give her a hard time about, you know, misdirecting me.”

I raise my eyebrows, opening my book again. “You do that.”

“Thursday, right? That's when she works next?”

His smile is so warm it makes my heart race, and I can't wait for Thursday.

Tags: brenna yovanoff, fiction by brenna, prompt
Subscribe
Comments for this post were disabled by the author