Fiction by Brenna: All Fall Down 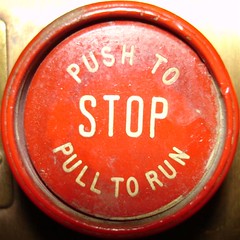 It happened just as the two o'clock classes were letting out, and once it got started, it went very fast.

The student union building was the exact wrong backdrop—shiny and new, fully-renovated, with a cafeteria-style dining area on each level and a combination pool-hall-and-video-arcade in the basement. From the pool hall, cutting through the building at a slant, was a long corridor of painted tile, stainless steel, and linoleum.

My name is Anne Elizabeth Mercer and I've done a terrible thing.

First, there are the basic facts:

The only good work-study jobs are the ones in the coffee shop or the library. Everyone wants those ones. After that is maintenance and grounds, and last of all, food service. Mine was in food service. I scraped the grill and cleaned the fryers. I came home smelling toxic and edible, covered in a slick layer of grease that clung to me like frosting. I don't think I have to worry about that anymore.

The kitchens are in the basement of the student union, near the pool hall. We are not technically allowed to use the service elevator, but the boys from marketing and resort management go to the pool hall on weeknights to get drunk and belligerent, and experience has taught me not to walk past them. On nights when I'd get off work late, I always took the elevator, clanking up to the main level of the student union. I've never been one for slavish adherence to rules.

Next, there is what happened:

The lunch shift had just ended. I was on my way to biology class with my hair scraped back in a food-service-approved ponytail and my white cotton smock jammed down in the bottom of my book bag. I was in the company of the other food service kids, not talking, but migrating to class with them like we were all part of the same herd.

“Needle day again,” said Rob, rolling his eyes. He was stocky, with dark stubble and battered glasses, and did things like rolling his eyes and coming up with awkward slang in order to hide the fact that he was deathly afraid of needles.

One of the dishwashers threw back his head and groaned. “Already?”

Jenny Durham nodded. “The new supplementary course came in yesterday. Didn't you see? The flier was taped up on the board this morning.”

I just fiddled with my hair. The heat and oil from the fryers made my ponytail unpleasantly limp. We'd been getting updated vaccinations every other week for almost two months now, and it was hard to keep track of what randomly-assigned letter we were on.

Even now, clusters of students moved toward us through the crowd with the ubiquitous health-center Snoopy bandaids pasted on their arms. They chattered and giggled in manic bursts. Laughter rang through the corridor from a dozen places at once.

Rob scowled at the floor. “Sounds like pretty much everyone on the whole damn campus is having a better day than I am.”

Somewhere in the crowd, too far ahead to make out the source, a girl screamed suddenly. It was a high, thin scream, too shrill and wavering to be a joke. No one was playing. There was nothing fun about it.

“What was that?” said Jenny, craning to see over the heads of the people in front of us. “Maybe someone fell, or cut themselves or something.”

It was obvious which her he was talking about. The girl was making her way toward us with her sporty nylon backpack and her Snoopy bandaid, but her eyes were strange. Her lips were scraped back from her teeth in a wide, wretched smile. She pushed through the crowd until she was almost past us.

Then she wheeled around and sank her teeth into Jenny Durham's neck.

For one long, spiraling moment, there was nothing in the world but paralysis. It was like a vacuum in my head. The world—pure white, like the sound had been turned off. Then the icy rush of panic smacked me in the face and Jenny shrieked and tried to pull away, but the girl was strong, holding her close and gnawing at her throat.

The blood was warm on my neck, splashing onto the floor like spilled ketchup, a red so red it looked fake. A confetti Christmas massacre all over everything, and it wasn't all Jenny's—not even close.

Around us, the crowd had come savagely, wildly alive, full of PacSun and Abercrombie monsters, all biting, giggling, grinning.

One more breathless second and then the adrenaline hit, and around me the bitten ones were screaming like pigs.

Bodies pressed against me as they squirmed and thrashed, no way to know who was only trying to leave and who was desperate to find a piece of exposed flesh, to bite.

Rob was next to me in the crush of bodies, and then he wasn't. One of the dishwashers grabbed my arm as he was dragged back, eyes fixed desperately on my face. I didn't reach for him. I didn't try to stop it.

I held my bag in front of me like a riot shield, slamming forward through the crowd. Just ahead, where I knew it would be, an alcove and the unmarked door that hid the elevator. I squeezed into the alcove and jammed my key into the knob.

Impossible to know who was safe, to sort out who was smiling from who wasn't. A girl reached for me, bleeding from the shoulder, eyes showing white all the way around the irises. I ducked into the elevator and slammed the door in her face.

When I pushed the button, the car rose and over the clanking, the screams rose with me. They floated up the shaft, muted and echoing but unmistakable. And then, with a cold certainty, I realized that not all the sounds were coming from below. Some of it was above me.

I didn't think long or hard.

I reached out and yanked the emergency stop.

Now, there is only what's going through my head:

Safe is a death metal record on pause. Safe is when the wind stops, when the hurricane is directly over your house. Safe is not dependable or permanent and if I move, if I slide an inch in either direction, I know what I'll find.

Any second now, I'll pick a destination. I won't have a choice. There's nothing for me here, in the space between floors. I could have reached for the flailing dishwasher. I closed a door in a bleeding girl's face. I've always known this about myself, but never so truly or so clearly. Outside, the screams are terrible, and I am capable of terrible things.

For now, though, I wait. I watch my hand. It floats over the emergency switch, aching to move, to touch the button that starts the world again.

Photo by Thom Watson
Tags: brenna yovanoff, fiction by brenna, zombies
Subscribe
Comments for this post were disabled by the author