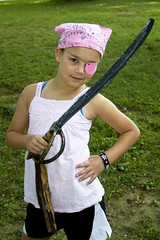 Hi, and welcome to our second official Round Table. Today, we got together for a chat about strong heroines in YA literature. We realized pretty fast that it was a HUGE topic - too big to really cover. But here are some of our initial thoughts, including what we think makes a strong heroine and examples of well done strong girls in YA.

Brenna: It's funny, I haven't really thought about it much before we started talking about using it for an RT topic. I know that's strange because it's such a kind of obvious thing to think about, especially when it comes to YA fantasy

Tessa: lol - I've been thinking about it longer than I've been seriously writing. We talked about it a lot in my AP English class (as my all-girls Catholic high school) and then I was a gender studies major/graduate student....

Brenna: When it comes to strong girls, I actually know a lot more about what I don't like in fiction.

Brenna: I get really anxious and turned-off when stubbornness or impulsiveness stands in for strength to me, strength is taking the time to make good decisions, not just railing against the powers that be

Maggie: I feel like there is book-strong girls and real life-strong girls, and it's hard to find one standing in for the other.

Tessa: Agency is key for me. Strength of character is 1) actively making choices, and 2) using individual talents AS strengths. So, what's the difference you see in book-strong verses real life-strong, Maggie?

Brenna: and sass, lots of sass

Maggie: Why, thanks. In real life, we don't often have big guys with supernatural powers lurking outside our windows. And so strength in the form of being able to twist guys' heads off while laughing sarcastically about it . . . well, maybe lots of women have it, but I personally haven't encountered it. Which doesn't mean I don't know strong women. Honestly, my rant? I feel like we often think of book-strength as a female character displaying traits commonly given to male characters instead.

Brenna: When I think of strong fictional girls I admire, I think of Melina Marchetta's characters. Her characters have these TRUE strengths.

Tessa: Yes, because in our society strength is still considered a masculine trait.

Maggie: No, it's because masculine strength is more easily identifiable. Ripping a guy's arm off: looks pretty powerful to me. Not falling apart when someone dies: harder to point out

Brenna: it can be overt and measurable

Maggie: crickets...something about ripping people's arms off does that to a conversation.

Tessa: It's because I start visualizing and having fun and getting distracted by the gore.

Brenna: fiction-specific (JELLICOE ROAD because I am a fan-girl) Taylor Markham is a huge coward about a lot of things, but she's really strong, because she faces them anyway

Maggie: Another Melina character: Francesca from SAVING FRANCESCA, because she gets herself together after her entire support network goes AWOL.

Brenna: Yes, F spends a lot of time being afraid, and then acts, even though she is afraid

Tessa:There IS a place for women in fiction who do those things that are associated with male strength, it just can't be the only kind.

Maggie: As someone who drives a flaming red muscle car, I believe you. Okay, here is another problem I have with the way a lot of women characters are in urban fantasy: Emotional distance or callousness is portrayed as strength. Which I don't think is true in either gender.

Tessa: It's the default, because feminine strength isn't valued as highly. Not falling apart when everything else around you does isn't what early English epic poetry was about. Our culture views strength as fighting bad guys with your big sword and then bragging about it. Not staying at home and looking after the kids, not emotional strength. That's changing, but it IS something we're still having to struggle against. What is VALUED.

Brenna: yes, and where my head goes with that is Katniss Everdeen

Maggie: Well, it's changing now, too, because people are figuring out that the guys that go out there and hack with swords and make it home then have to have the strength to not fall apart too.

Brenna: part of THE HUNGER GAMES for me is Katniss figuring out that being emotional and affectionate and vulnerable are all strengths too

Maggie: I agree totally. So the question is, as a writer, how do we portray that? How do we make sure that all readers will pick up on something that we all admit is disgustingly subtle?

Tessa: Metaphor! lol. That's my go-to answer for most everything.

Brenna: I think at the core, it's being able to show the fear/risk, and also the benefit

Tessa: Choice. Like, back to JELLICOE ROAD, when she chooses to go into that tunnel at the end. (Is that non-spoilery enough?)

Maggie: It's pretty damn spoilery, but the court will let it pass.

Brenna: she chooses something horrifying to her because of how much other people have come to matter to her. I think part of it is seeing how her old horror has been replaced by the new horror of losing important relationships. (I'm being ridiculously vague, looking back at that)

Maggie: Back to how we do this, because I have to say, I have SHIVER reviews that say Grace is incredibly strong, and then I'll have others saying "she makes feminism a thing of the past" and it's clear they didn't get what I was trying to do.

Tessa: Basically, it's the same answer to every question about how we do something as writers: write complete characters.

Brenna: Yes, and then have them struggle to manifest their better selves?

Maggie: Do you think that everyone agrees on what strength is, though?

Maggie: I think part of the prevalence of arm-loppy-characters is because it's shorthand -- everyone can look at that and say, "A-yup, that babe is rockin' powerful."

Tessa: Yes, it's easier in a lot of ways, because it's more obvoius.

Brenna: what I personally value is almost all levelheadness, the ability to be sensible, analytical, and that's not going to be top priority to everyone. I like characters who take calculated risks, and only sacrifice when there really is no other option

Tessa: I want characters to think, too, Brenna. I need introspection, at some level.

Maggie: Relationships are important to me. I find it very hard to think that a character who is strong and cold is not just broken. I want someone who is strong and strong in relation to other people, able to take care of them but also be vulnerable.

Brenna: back to Katniss, what I like about her is that she kind of is broken, but not irreparably

Maggie: Right, because Katniss works her way back into interpersonal relationships, and I don't mean just the hubba-hubba kind.

Tessa: So, do we have examples of strong heroines in any of our MF stories?

Brenna: Sadly, a lot of mine are kind of busted. I tend to do that in the short form and save the strong ones for longer work.

Maggie: I have to think to separate the genders in my head. Mostly I try to do strong character in general and I don't think about the gender after

Maggie: Okay, "Wag. You and I were just talking about that, Tess.

Tessa: Yeah, she's got that Katniss kind of strength, in "Wag." That desperate, doing what she has to to survive, but not giving in and finding her own way thing.

Maggie: It's that thing where strength is because you don't just give up when everything seems impossible.

Brenna: I liked my girl in "Midnight Comes," because she was so anti-being-anything-but-herself. She tries on a new person and can't cope for more than like 20 minutes

Tessa: That's a great example. I think my most recent girls that I would put under here are the narrators in "The Summer Ends in Slaughter" and "Devils of Our Better Selves." My "Devils" girl chooses the hard way, instead of the shiny fairy tale way. Because she LIKES who she is and doesn't want to e changed.

Maggie: Yeah, that's true. I think strength and self-confidence/ self-acceptance often ride side by side.

Brenna: yes, that embracing of the true-you makes me respect characters, (only when it's not done in a selfish screw-everyone-else way). To clarify: I love it when it seems deep and genuine, rather than petulant

Tessa: Me, too, and I think a lot of that comes down to taste. Or perspective, rather than taste. SO, what are our favorite strong heroines in YA books? One of my favorites is Sophie in HOWL'S MOVING CASTLE.

Brenna: Alice in THE MAGICIANS

Maggie: Francesca from SAVING FRANCESCA, duh. Whatsherface from HOW TO SAY GOODBYE IN ROBOT.

Maggie: you should. Ignore that I can't remember her name. It's excellent. Nimira in MAGIC UNDER GLASS too.

Brenna: yes, I liked her a lot

Tessa: Yelena in POISON STUDY. OH and Aerin from THE HERO AND THE CROWN, because yes, she fights dragons (and they almost kill her) but she does it by using her brain, her desire to help, to very slowly figure out alternate methods of fighting, instead of the accepted mode in her home kingdom. So she's like this amazing combination of kick-ass strength and inner-resilience strength.

Maggie: I know exactly how to end this! GO HERMIONE!!! For being the only one who ever earned success in the HP books.

Brenna: For being brilliant and crying when she feels like it

Maggie: For not giving up when things seem hopeless. And standing up in the face of bigotry.

Tessa: That's a great example of a character being strong, without it being her defining characteristic!

Maggie: Yeah. I don't know why it took me an hour of chatting to remember her. ;)


Thanks for tuning in! Let us know your favorite strong girls from YA in the comments, we'd love to hear your thoughts and opinions, Oh Readers!!!