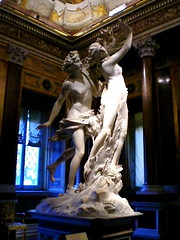 I. I am the child of two people who do not love each other.

They named me Daphne—a girl whose story is colored by power and obsession. Her god loved her, and she ran. It sounds so simple. Say it out loud once, it takes five seconds.

But here is where it gets complicated.

Her god loved her, but her father loved her more. He loved her so much that he couldn't let anyone else touch her, so he turned her into a tree, complete with bark and leaves. A root structure. In this way, he kept her safe.

My parents named me after a girl who was loved too much, which makes me think my name is their way of reconciling themselves to the fact that they do not love me at all.


II. I am two colors. Black and white. The division between light and dark. Order and Chaos. Presence and absence.

These are not colors.

My mother is queen of all demons. This has left me with a legacy of culture and status, but nothing substantial. I am the by-product of a heartless vixen, which explains perfectly why she does not love me.

My father? He should have tried harder.


III. The boy is tall, with dirty-blond hair and eyes the clear color of water. Of snow-melt. A gift to me on Ash Wednesday, he comes complete with history and guilt. With the smell of leaves and branches, burning.

He is broken in three ways, sometimes four. I count them.

-He believes himself to be human, but is not actually. At least not anymore. This is similar to the way he believes himself to be alive.
-He has a grim affinity for drugs. This comes with no caveat and no parentheses. This is just a fact of life.
-He is doggedly unhappy and once decided to kill himself. Sadly, he has not really stopped.
-On certain occasions when these first three things have ceased to be bad enough, he loves me. The other sins are commonplace, forgivable under a big enough umbrella. This fourth is irrevocable. Unconscionable. In a word, it is utterly damning.


IV. He loves me anyway.


V. There are scars on his arms from how badly he didn't want to live. Not the nicks and scratches of indecision. He made his plan and followed it. His efforts run vertical, wrist-to-elbow—snake off and diverge, following his veins. They look like branches.


VI. I ask if he's ashamed. The question is simple.

His hair is gold like sunlight, his eyes are pale blue. He has all the trappings of humanity, the emotions, the colors, but he decided not to keep it. Decided that it wasn't and could never be enough.

And so, I ask if he's ashamed of not loving, or of not being loved. I don't care if the question hurts him. He gave up too much—and too willingly—for me to be gentle.

I would have kept those things forever, if they'd been mine.


VII. My father gave me a ruined boy to compensate for the fact that he does not love me.

I curl against him, tuck my head beneath his chin and listen to his heart. It says stay and wait. It says regret. He knows what it is to want love, a love so fierce you grow roots. I hear his heart say please.

He went looking for angels and found me instead, girl of the sorrows, sad but not sorry. I waited for a sign, a star to fall. He reached for a knife and drew branches.

*This week, our common prompt comes from Anne Marie (

annemariewrites) and is Bernini's sculpture of Apollo and Daphne, which can be found here
Tags: brenna yovanoff, common prompt, fiction by brenna, myth
Subscribe
Comments for this post were disabled by the author