Fiction by Brenna: The Beginner’s Guide to Leaving 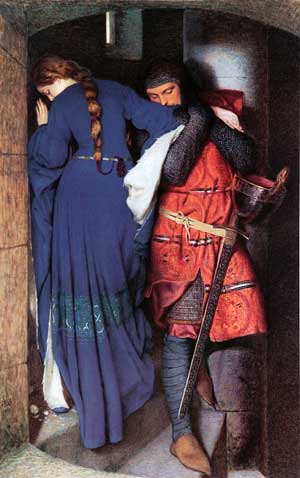 First, there are the little things—the all-in-your-head things. You think they matter, but they don’t. If you obsess about them too long, they can make you feel guilty or like a bad person, but they’re just distractions, so let’s get them out of the way.

Don’t think about how hurt he’s going to be, or if your mother will say, “Honey, maybe you could be a little less callous?” or, “Honestly, Georgia! What was wrong with this one?”

Don’t think about it.

You’re thinking about it.

Maybe we should start over.

Once, I was standing in the cafeteria with Elizabeth Knox and she was in a real state, fuming about Skip Swanson because he was having a creamed-corn fight with his friends and almost knocked us down.

She said, “Chivalry is dead.”

She said it like she was announcing the death of Western Civilization, when she really just meant opening car doors or spreading your coat across a puddle. But the truth of it hit home, and I knew that she was right. That no one was going to slay dragons for us.

The first rule is that you have to be sure you’re leaving for the right reasons. You can’t call it quits because of failed chivalry. No one is going to come riding up to your tower and climbing up your hair, and really, who wants that?

The fact that once, when Skip yelled at me in PE to get off my ass and stop acting like a helpless female, Jason Curtz did not sweep in and carry me away on a white horse is not a reason. The fact that once, at a party, Jason called me his little sugar-bunny in front of his friends? I gave him back his letter jacket the next day.

The second rule is, never wait to leave until the end of a date. It’s just rude. If you’re done, then you tell him. You tell him right away. Don’t wait until the movie’s over and you’re on your way home and he’s already bought you popcorn.

Once, Andy Moskowitz was about to take me bowling. We were just getting out of the car and right then, I decided I couldn’t stand his monologue on baseball stats for one more second, I couldn’t do it anymore, and I told him that.

Skip and all those boys were hanging around the parking lot. They heard me tell Andy it was over and all started laughing and whooping, and that was bad enough. Then Skip pushed himself away from the fender of someone’s proudly rusted car and started across to us.

He came in close, like Andy wasn’t even there, and he said, “Georgie, when are you and me going to hook up? I’m starting to feel like I’m the only guy at East you’ve never broken up with. Come on, kid—don’t leave me out.”

And Andy stood there staring at me and then it was just awkward.

I could have put off the break-up and waited until the awkwardness faded and Andy wasn’t feeling so humiliated—waited until we’d bowled a few sets and it was a better time.

Don’t let yourself fall into that trap. It’s appealing, but self-deceptive. If you’ve already made up your mind, there is no better time.

The third rule is a hard one. Now listen closely, because this is very important: Do not give him false hope. None of these easy platitudes about the memories you shared, or still being friends, or how you’ll treasure him always. No talking about how this is all happening too fast and you just need some time.

I made this mistake only once, and it still came back to bite me. To this day, Nathan Gardner will sometimes leave plaintive notes in my locker or text me to ask if I’m ready to try again, if we’ll ever recapture what we had. Trust me, you do not want this. If you’re leaving, you don’t need time. You need an exit strategy and a fast car.

The fourth rule is, leave with conviction. Don’t stammer or apologize, do not look ashamed. If you look like you regret it, your resolve is already crumbling. You’re never getting out of there.

Ryan Nealy is on the debate team, but when I was through with him, he could barely string together two sentences. I left him sitting in the cafeteria, staring into space like he just got hit with a flash grenade.

I was on my way to math class, using my reflection in the trophy cases to reapply my lipgloss, when Skip Swanson came slouching across the commons to me.

“Congratulations. You just destroyed Nealy. Does that mean you’ve leveled up? Like, can an ice princess become an ice queen?”

“Whatever you want to call it,” I said, capping the gloss and pressing my lips together.

And he said what he always said, only it was slow this time, and softer. He said, “For real, Georgie. When is it going to be you and me?”

I grinned like a cat, narrowing my eyes, showing all my teeth. “When you start riding around on a white horse and killing dragons, Skip.” And just saying his name was like tasting something good. My mouth got dry and I could see in his face that he felt it too.

He nodded and smiled a different smile. A better one. The kind that lights you up and crawls inside you heart and makes you want to do stupid things.

He said, “Let me run down and pick up my saddle. I’ll meet you back here in twenty minutes with some dead dragons.”

So I did the only thing I could do. I smiled and shook my head. “I’m not joking, Skip. It’s never going to happen.” And then I walked away.

Because the fifth rule of leaving is the killer. It’s the one that all the other rules depend on.

Never, ever date a guy you wouldn’t leave.

Prompt: "The Meeting on the Turret Stairs" by Frederic Burton

Tags: brenna yovanoff, common prompt, fiction by brenna
Subscribe
Comments for this post were disabled by the author