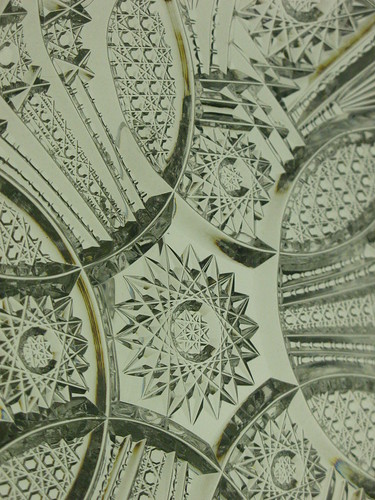 The letter is hidden between a box of straight pins with colored heads and a cut glass candy dish. Its contents disintegrated from individual peppermints into one big lump long ago. I take the yellowed envelope down and slip it into my jacket pocket without looking at the seal. I know it isn’t broken.

My very first crime was stealing from that candy dish. My oldest cousin snuck up behind me with a fat green garden snake twisted in his hands and I dropped the lid, knocking off a sliver of glass.

My second crime was using the box of straight pins to pay him back when I was whipped with a leather belt, and he was not.

The linoleum floor has yellowed and pieces are missing. Part of me wants to find them and fit the chips in like a puzzle, but no one is here to care. The door to the kitchen is cracked half an inch, but the knob is gone. I slide the tip of my finger over the strike plate and wiggle it to fully release the latch.

Nicotine coats the stained kitchen cupboards. The cookie jar sits to the left of the stove, below the curio shelf holding tiny jars of dried herbs. The smell of neglect is two notes off from the vibrancy of life that used to hum in this room.

Witches used to be welcome here, before progress and electricity brought better ways, smarter ways, or so the Outsiders thought. Finding that things like love potions and tarot cards were a regular way of life on our side of the mountain was a shock to them. A shock and an abomination.

Why use a rod to know exactly when to plant a garden or the most fertile spot to do so, when the Farmer’s Almanac indicated the first, and a good compost pile provided the second? Who needs a healer to tend to the sick and dying, when modern medicine could offer a cure?

The setting sun shines through the bottles sitting on the windowsill above the sink. I stare at the stained glass shadows they make on the kitchen table. I wonder about the last time anyone sat there. They had to know what was coming. Were they afraid, or were they angry?

The first time the two men came to our house, Granny had not managed kindness, but she had been hospitable. After all, they’d passed through the haint blue door into the warmth of the elm log fire without incident. So many cautions taken for protection, yet they had no effect on the men from the city. If anything, they drew the wrong sort of attention, just like the empty black cauldron in the front yard.

The men hadn’t come to our house on a witch hunt. They’d been looking for me. The simple act of stealing Teaberry gum from the country store brought about the ruin of my family.

I chew a piece now. It was legally acquired – one of the first things I bought with the paltry sum the prison warden had given me when he set me free – purchased from the same store I robbed two years ago. On my eighteenth birthday. One day could make such a difference. Gone; sent to county prison because of a long juvenile record.

Not here to listen to the screaming when the men returned with reinforcements.

The same cousin who’d held up the fat snake so many years ago is the one who whispered the location of the letter, left by my mother as her last living act. I touched my hand to my jacket pocket now, and wondered yet again how he’d escaped the fate of the rest of the family. How he knew where the letter was, and when it had been written. I wanted to kill him where he sat on the day he came to tell me, but a guard and a thick sheet of greasy glass stood between us.

But I would find him.

I pull the envelope out, turning it over and over in my hands. Do I read it now, when my heart is calm, or after I view the cautionary tale the authorities had staged in the front yard, the one that no one dares to remove? I imagine curiosity seekers peering through the protection of the forest to see if the rumors are true, if the punishment is as horrible as everyone has been led to believe. When they find it to be fact, I suspect they run home to hide recipes and wands, charms and tea leaves. Maybe they find spots in their cellars, or bury them with their dead. No one wants to meet the same fate as the members of my family.

As much as I want to read the letter now, I don’t know if the fire of revenge will clear my vision or cloud my purpose.

I put it back into my pocket and follow the carpeted hallway. The bookshelf to my right is empty, a hundred years of knowledge, most likely destroyed. When I reach the front door, I hold onto the knob for a few seconds. Then I take a deep breath and step outside.

The blackened, charred remains of my family are heaped on a funeral pyre that hasn’t burned for two years. Nothing grows on the ground around it. I can smell the smoke; hear the screams.

My stomach turns, but I do not close my eyes.

I take the letter out of my pocket, sit down on the front porch, and rip open the envelope. I read the contents aloud in a strong, clear voice and look up.

In the center of the funeral pyre, something moves.

Myra's debut novel HOURGLASS is available now! You can learn more on her website here!