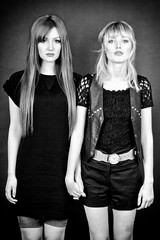 The apartment was small, but it was in an excellent location, right in the heart of the Warehouse District and a five-minute walk from the Expo Center. Adeline was only staying for a week or so—just until the trade show was over and all the boutique orders were in. Hopefully, there would be a lot of them. It had been a slow year.

The girl who usually lived in the apartment was a bartender named Daniele. She was away on a month-long trip to Spain and was renting out the place for ridiculously cheap as long as the temporary resident agreed to water her plants.

Adeline wasn’t much of a plant person, but you couldn’t argue with a weekly rate that was, quite frankly, phenomenal.

The night she got into the city, it was raining hard and the streets were flooded, full of tiny white-capped waves and floating trash. She had to wade from the taxi to the curb, holding her suitcases up out of the high-running gutters. It had been a long flight and everything had begun to blur together, so that later, she barely remembered the slow, clanking elevator ride upstairs, the turn of the key in the lock and the headlong fall into sleep.

*****
She woke up late the next morning, in Daniele’s bed, with the sun coming in through unfamiliar curtains.

The first thing she noticed about the apartment was that the whole place had a smell. Not unpleasant, but strangely specific. It was an ancient, shut-up smell, like abandoned attics and pages turning into dust. It reminded Adeline of estate sales, or how she thought mummies would probably smell, but she found it oddly addicting. She couldn’t stop breathing it.

She took her time unpacking, arranging her things on the bathroom counter and the dresser, alongside Daniele’s. Then she wandered down to the lobby to see if there was anyplace to eat nearby, a cafe or a coffee shop.

Outside though, the road was blocked off by barricades and police cars and the sidewalks were crowded with gawkers. The girl at the front desk only raised her eyebrows and gave Adeline a bored look.

“What’s going on out there?” Adeline asked, feeling a little disoriented.

“Looks like some pure fool got it into his head to climb up on the roof and start yelling about how he’s going to jump. It happens in the summer, sometimes. If I were you, I’d just stay in ‘til it quiets down.”

So Adeline went back upstairs and spent the rest of the afternoon organizing her portfolio and hanging up her clothes. The show didn’t start until Monday and she supposed she could use the chance to settle into the apartment, which was full of area rugs and old, heavy furniture and framed pictures of Daniele, who turned out to be a pale, willowy girl with starlet-blond hair and too much eyeliner.

Adeline thought that she would make a good concept model. A muse for some up-and-coming fashion-peddler. Some other designer who specialized in ragged hemlines and liked to use metal studs on everything.

Maybe back when she’d been miserable small-town Adeline, with her grim, bleary childhood, her affection for the shrill and the destructive. Before she’d learned to leave the past alone and only focus on the here and now —before she wised up and got the hell out of dodge, left behind the old night-clubbing, chain-smoking Adeline and become the nervous, polished professional, who bought linen by the bolt and designed sensible-yet-versatile career sets.

The apartment was bigger than it had looked the night before and it seemed that every time Adeline turned around, she discovered some new alcove or closed door.

There was a little room just off the study that was decorated entirely in green, and one through the back of the bedroom closet that was filled with remnants of distressed leathers and dark, raw silks, and piles and piles of concept drawings. The outfits weren’t to Adeline’s taste, but she had to admit that some of them were pretty good.

*****
The next morning, Adeline went out for groceries, only to find the elevator doors propped open and an old woman in a canvas coverall digging around in a battered toolbox.

“It’s not running,” the woman said without looking up. “You’ll have to use the stairs.”

The apartment was on the fourteenth floor and Adeline had to admit that even if she had the motivation to walk down, she didn’t really feel like lugging the groceries all the way back up.

“Will it be fixed tomorrow?” she said, a little doubtfully.

The old woman shrugged. “Should be, I guess. God willing.”

Adeline nodded. She went back to the apartment and sat in a high-backed chair in the living room, smelling the dry, dusty smell and running her fingers around the crochet collar of her blouse. There was a picture of Daniele on top of the old upright piano. Her hair looked darker than Adeline had realized. Her face was mysteriously familiar, like looking at a relative you hadn’t seen in a very long time.

Adeline closed her eyes and leaned back, feeling comfortable for the first time in months. Maybe years. She was glad she had decided to stay in.

*****
The morning of the expo, Adeline spent forty-five minutes fixing her hair and ironing one of her career-casual dresses. Then she started out with her purse slung over her shoulder and her portfolio under her arm. But when she tried the apartment door, she found that it wouldn’t open.

She jiggled the knob, and then tried sheer brute force, but it was stuck. When she called down to the desk, the phone rang for what seemed like minutes on end, but no one answered. By the time she hung up, her hands were shaking. She was supposed to pick up her badge at the registration table, and then be stationed at her booth in fifteen minutes.

She found Daniele’s number taped to the refrigerator and dialed it without much hope, but Daniele picked up on the first ring. Her voice was husky and musical.

“Is there a trick to opening the front door?” Adeline asked after the pleasantries were out of the way. “I mean, do you have to do something special to get out?”

Daniele was silent for a moment. Then she took a deep breath. “Honey, you have to be fierce. You have to know exactly what you want and how to get it. And the state you’re in, you’re not going anywhere.” It sounded like she might be smiling.

Adeline stood in the kitchen, swaying in her sensible heels and clutching her phone.

“I’ll miss my show,” she said. She tried to sound calm and reasonable, but by the time she reached the end of the sentence, she was nearly crying. “This is my biggest week of the year. I need this.”

“Baby,” said Daniele and something about the familiarity—the absolute presumptuousness of it—chilled Adeline. “I know you want to be Target-famous and dress everyone in chic, durable neutrals and be a big girl and all that, but look at you. You’re falling apart.” Her low, husky voice sounded higher and more girlish suddenly. More like Adeline’s.

“What are you talking about? I was a Mod Madness pick for their Young Designers list. I’m a fresh new talent. If I keep my sales up, I’ll have my own boutique by the time I’m twenty-eight!”

She began to pace, drifting through the front hall and the living room, wandering back and forth in front of the piano. Today, the girl in the photo had long dark hair like Adeline’s. Her smile was small and demure, but there was something cocky about it. Something unnerving.

Adeline crossed to the window, but light coming in was dim and the curtains seemed too heavy to push aside. They wouldn’t budge. For the first time, she began to suspect that there really was nothing out there. That maybe there was nothing in the whole world but this curtained window, this apartment, and the sweet, smiling voice on the other end of the line.

“Aren’t you supposed to be in Spain?” she whispered, knowing that the question was pointless. There was no trip to Spain. There was no getting out. No going anywhere.

Daniele took another hitching breath and it dawned on Adeline that she was laughing. “You need to relax. Look, I have to go now. They’ll be opening the exhibit hall in a minute and I have to get my samples ready. Don’t you worry, though—we’re going to fine. We’re going to sell the hell out of these matched separates, and then when that’s taken care of, I think we’ll move on to some of my designs.”

When the phone went dead, Adeline studied it awhile before setting it on the counter. She took off her shoes. She spent a long time sitting on the floor in the front hall, staring at the locked door. It was funny, the things that could exist, even in the smallest, darkest spaces. Funny, the things you believed in. That, for instance, you were a real, actual person with no shadowy corners, nothing left unknown.

After a long time, she got up and walked back through the bedroom closet into the little sewing room, with its swatches and scraps and stacks and stacks of butcher paper. The silks and leathers were gone now. The room was full of light tweeds and nice, soothing cottons. She was beginning to suspect that the smallness of the apartment was deceptive. With some work, she was reasonably sure that it would get bigger. Maybe she could even use this as an opportunity. A chance to work unfettered, perhaps to make something substantial—something great.

And yes, there was a small, secret part of her that looked at the closed front door and sighed in relief.

She had to admit, it was nice in here.