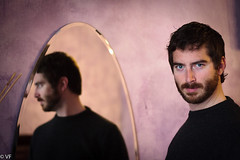 At first it was little things—how he always wore the watch I’d given him, even though it left a raw spot on his wrist and he’d never worn one before.

I told myself that marriage really does change a person. But I think when people say that, they mean gradual change, like becoming more patient, and not that the person arbitrarily starts liking green beans. They mean little things, not whole personalities.

We’d been married for two years when I first started to feel like maybe I was living with a stranger. I shook it off until one evening when I was getting ready for bed and found myself remembering how Bradley had been pathologically unable to put his socks in the hamper and it used to drive me crazy. But he hadn’t left a single piece of laundry lying on the floor since the wedding.

The night I knew, really knew, we were staying up at a rental cabin with three other couples. (We’d become the kind of people who did things with other couples.) I knew something was wrong because he did the dishes after dinner and when we played dominoes and he won, he didn’t rub it in anyone’s face.

Later, I lay beside him in the dark, trying to decide what to do. He asked me if something was wrong, but I said no. Having a husband who picks up after himself and treats other people with consideration isn’t wrong, and I couldn’t tell whether I was awake or asleep.

We drove home the next morning without saying much. I was deep in a funk and he let me stay there. He bought me a cup of coffee and a danish without me having to ask. He didn’t try to make me talk to him.

Later, I locked myself the bedroom. I dug through his college footlocker and his dresser drawers, even though that’s not what trusting wives do.

It was in the back of the closet—this little wooden box tied with red string. There was a picture of me stuck to the top of box with Scotch tape, and the string was positioned directly over my eyes. When I undid the knot and the string fell away, I felt a curtain lift, like shaking off a cold fog. What had seemed like a long, confusing dream turned true and certain. It was clear, suddenly, like that knotted string had held my photo down, kept the doubts from surfacing, and now they were all floating there right in front of me.

The box was full of scraps and trinkets. The kind of things that wouldn’t mean anything if you weren’t already scared your husband was a very convincing fraud. There were burned matches and a baseball card and a lock of hair wrapped in satin ribbon and at the bottom, a little cloth doll made out of what looked like one of Bradley’s old T-shirt’s and tied up with twine.

When I went back out into the living room, Bradley was sitting in the couch, reading a copy of The Divine Comedy. For fun. The Bradley I’d gotten engaged to never did things like that.

“Who are you?” I said, standing over him. My voice sounded calm and polite. Vaguely interested.

He looked up at me, smiling cautiously, like I was trying to play a game with him and he didn’t quite know the rules. “I’m Bradley Walsh.”

And I started laughing.

For a second, he just sat there, holding the book. “Why is that funny?”

He didn’t answer right away. He just looked at me. Since the wedding, his eyes had become softer, more unguarded. Before, I’d always thought the new openness meant he’d discovered how much he loved me. That I had changed him. Now I was thinking that maybe he had just changed.

He set down the book and leaned forward, clasping his hands between his knees. “I’m Bradley. I’m your husband.”

He just looked up at me with a pained expression, like I was hurting his feelings.

For a second, I thought that he wasn’t going to tell me. He was going to say again that he was Bradley Walsh and then I wouldn’t argue. We would keep playing this game until we both forgot that’s what it was and we got old and died. But when you’re married to someone, you’re supposed to know their hopes and wishes, their secrets. When you’re married, you’re supposed to know exactly who the other person is.

He swallowed, unclasping and re-clasping his hands, but he didn’t look away. “I’m Alexander Boggs.” He said it like it was the most painful thing that had ever happened to him.

I stood looking down at him, holding the little T-shirt doll. Alexander had been Bradley’s next-door neighbor for the whole three years we’d dated, but I hadn’t seen him in forever. He’d moved right after the wedding and they’d fallen out of touch.

Alexander had been thin and weird and quiet. He’d been shy, too smart to fit in easily. The kind of person who would read The Divine Comedy for fun.

He sat on the edge of the couch, looking down at me—the sorriest, saddest look. “Because I loved you,” he said simply. “And you loved him.”

He half-rose, holding up his hands, shaking his head. “No, no, no—he’s not dead. He’s in Seattle.”

I sat on the floor with my knees pulled up and my mouth open, remembering the last time I’d seen Alexander. It was two days before the wedding and I’d run into him at a bar downtown when I was out with my girlfriends. I’d been surprised to see him there. It didn’t seem like his kind of place. He’d cornered me out on the patio, telling me that Bradley wasn’t the person I thought he was, telling me not to go through with it, not to walk down the aisle. His voice was shaking and his eyes had been desperate in a way made me think that I’d never understood desperation before. I’d just assumed that he was drunk.

I nodded, twisting the doll in my hands and looking away. “He came to me, you know. On the patio at Lucy’s. He—I think he tried to tell me. He was a mess, practically begged me not to marry Bradley. He was almost incoherent. Why wouldn't he at least try to tell me what had happened?”

On the couch, the man I married didn’t answer right away. For the first time in the two years since the wedding, he refused to look at me. “That was . . . before. Before the switch. That was me.”

I sat on the floor, clutching the doll, picking at its length of knotted twine. “What will happen if I untie this?”

When he did look at me, his eyes were pleading and Bradley had never, never looked at me like that—that deep, open look, like I was seeing him exposed and he was letting me, like I was seeing all of him, his darkest corners and his heart. He didn’t have to tell me what would happen. If I wanted Bradley back, I could have him.

Since the wedding, wristwatches and picked-up socks weren’t the only things that had changed. Kissing had gotten better. Movie nights and walks through the neighborhood and arguments and conversations had gotten better. Even sitting side by side on the couch together reading was better.

The doll was soft and small in my hand, uncommonly heavy. I held the length of twine between my thumb and forefinger, waiting to see if I would pull it.